Latin America is made up of a group of countries colonized by Latin-speaking European peoples, above all Spanish and Portuguese.

From the 15th century, European metropolises began the colonization of the American continent.

The great powers such as Portugal and Spain in an attempt to expand their domains and collect wealth to supply their markets, invaded the territories that would give rise to the Latin American nations, subjugating the peoples who already lived here: Brazilian Indians, Mayans, Aztecs, Incas, etc. 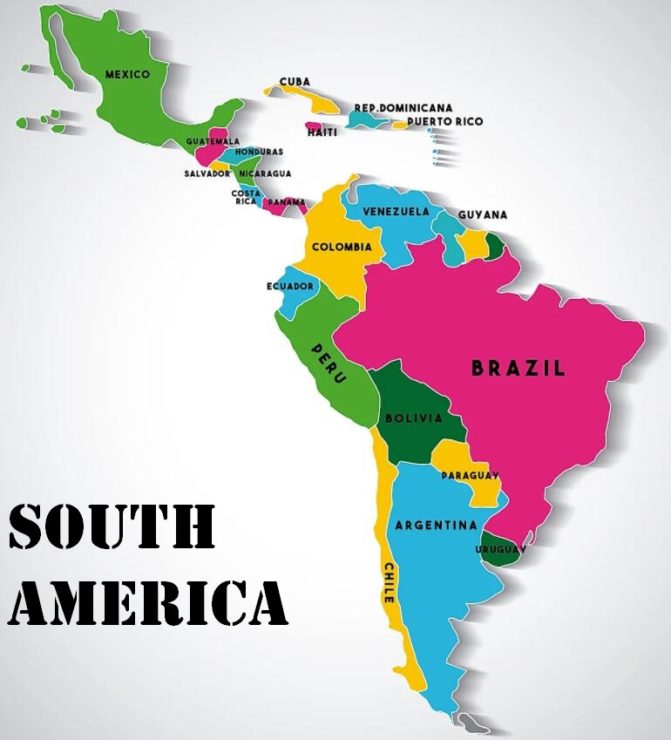 There were more than three centuries of domination, but in the 19th century, several liberation movements would transform the history of Latin America. The struggles for independence would put an end to European domination on the continent by starting the formation of National States.

There were more than three centuries of domination, but in the 19th century, several liberation movements would transform the history of Latin America. The struggles for independence would put an end to European domination on the continent by starting the formation of National States.

The movements in favor of independence were marked by the violence practiced by the metropolises against the “rebels”. With the achievement of political emancipation, most nations would adopt the republican regime as a form of government, except Brazil that was governed by a monarchical regime until the proclamation of the republic in 1889 (Mexico for a short period was governed by a monarchy).

Even with independence, these countries continued to have cultural characteristics inherited from the colonizing metropolis. An important feature of the independence processes both in Brazil and in Hispanic America, is the leadership of local elites in the emancipation movements.

The struggles for independence were not motivated by a nationalist feeling, but by the desire of the local elites to take over the place occupied by the European dominator.

With the achievement of political emancipation, Latin American countries would seek to build their own identity. The more than three centuries of domination have caused a considerable delay for these nations.

While the vast majority of European countries already enjoyed the benefits of industrialization, in Latin America the dominance of agrarian elites in political and economic command predominated. The economy was intended for the production of agricultural products that would mainly supply the demanding international market.

In many countries, monoculture still prevailed. In Brazil, for example, coffee was the basis of the economy until 1929.

The great world powers saw in Latin America a potential consumer of their industrialized products. This need to acquire goods manufactured by industrial powers generated enormous dependence on Latin American countries, mainly dependent on England and the United States.

To aggravate this scenario, many nations have taken out loans from the powers that be, further strengthening the ties of economic dependence.

The formation of National States did not mean the full independence of the population. Power in these new nations came to be exercised by local elites, whether through a republican or monarchical regime, was marked by authoritarianism.

Political alliances were formed in exchange for favors such as protection, land and public office for their allies. In Brazil, the first constitution enacted in 1824 was strongly authoritarian character with the creation of the moderating power, which gave full powers to the Emperor D. Pedro I.

In Hispanic America, the dominance exercised by the Creoles (children of Spaniards born in America) meant that the majority of the population remained controlled by an authoritarian government.

Throughout the 19th century, the borders of the new states still underwent some transformations. Conflicts such as the Pacific War that involved Chile, Bolivia and Peru in the dispute for the Atacama Desert; Paraguay War dispute that defined the borders between Brazil, Paraguay and Argentina; Cisplatina war triggered by the annexation of Uruguayan territory by D. Pedro I were some regional clashes that influenced the reorganization of border limits.

Even at the beginning of the 20th century, Latin American countries continued to supply raw materials and agricultural products to the industrialized powers, but the outbreak of the First World War in 1914 would change this situation.

With the outbreak of the conflict, Latin America was prevented from trading with these nations due to the war, which forced them to produce domestically what was previously purchased from the United States or Europe. This policy became known as import substitution.

Industrialization has undergone an impulse, changing the economic and social configuration of these countries, the working class emerges as a new social class while the urban population grew every day with the arrival of rural workers in search of better living conditions.

The centuries of European domination followed by the control exercised by authoritarian elites, has made Latin America historically complicated territory. Social inequalities coupled with high foreign debt have meant that Latin American countries are rated as underdeveloped. Among the main problems we can mention:

The problems generated by underdevelopment still represent a serious obstacle for many countries in Latin America. However, since the 1990s, these nations have been achieving certain economic stability.

Since then, Latin America has been establishing economic partnerships with the great powers, which facilitates the entry of foreign capital and its application in the productive sectors, which has enabled greater integration with the international economy.

Another factor worth mentioning is the negotiation of the foreign debt of these countries, which allowed for greater control over inflation and economic stagnation.

Latin American nations share many characteristics, such as the fact that they were colonized and became independent almost at the same time. However, Latin America is formed by a group of countries that have different economic, cultural and social traits.

Perhaps the great wealth of this part of the American continent lies in the cultural diversity of the Latin peoples, which at the same time distinguishes them, but also unites them around an ideal that is to achieve their sovereignty.