The political unity of the Middle East, created with the Islamic conquests, was of a fairly short duration. An essential element of the dissolution process that began from the 900th century was again a nomadic people, the Turks who first as slave soldiers, then as rulers created dynasties of shorter or longer duration. The Turks imparted a military dynamic to Islam that led to the conquest of Asia Minor (1071) and over the following centuries to the establishment of an Islamic empire (Ottoman Empire) in the ancient Byzantine territory. The Turkish language spoken by the new rulers took its place as the third major language of Islam alongside Arabic and Persian.

It was also Turkish army leaders who led the raids against India and the establishment of an Islamic empire, the Delhi, in India from 1206. northwestern territories where the connection to the Islamic core country in the Middle East was strongest, and in Bengal, where the clearing of rainforest to arable land was still on. First from approx. In 1335, a Hindu reaction began with the establishment of the South Indian kingdom of Vijayanagar.

Turkish domination remained in the 1200s. interrupted by yet another wave of nomadic attacks from Central Asia, which under Genghis Khan and his sons for a time created the largest empire that Asia (and the world) has yet seen, the Mongol Empire. After the death of Genghis Khan (1227), the empire was divided between his sons who continued the attacks to the east, south and west. The conquest of northern China, initiated by Genghis Khan, was completed in 1234. The Russian rulers were incorporated in 1237-40. Already in 1219-21, Turkestan and Persia were over, and in 1258 Baghdad fell, since 900-t. had been the central city in Iraq. After 1259 the empire dissolved politically.

In several respects, the short-lived conqueror had lasting significance. The roads through Central Asia were open as never before. It was thus during this period that Europe from explorers, first and foremost Marco Polo, received secure intelligence on distant China, and it was the open caravan roads that in the mid-1300s. brought the plague, the black death, to both China, the Middle East and Europe. It is also possible, although the theory is disputed, that the Mongol storm was the cause of the decline in the previously so good Middle Eastern economy due to the devastation and genocide that were part of the Mongol strategy.

However, as so often before, the conquerors were soon influenced by the conquered areas. In the west, the Mongols took Turkish language, Islamic religion and administrative customs from the conquered territories. In the East, after their conquest of 1279 throughout China, they founded a dynasty, the Yuand Dynasty, which was soon deeply influenced by Chinese culture, though the dynasty sought to make use of non-Chinese military people and officials – such as Marco Polo.

The world empire of the Mongols was the culmination and beginning of the end of the millennium in which the nomads repeatedly intervened in the lives of agricultural cultures. The development of firearms and of new infantry tactics was probably crucial in this context; the prepared nomads lost the military-technical advantage created by their mastery of the horse. Throughout the following centuries, however, rulers and soldiers of Turkish origin continued to play a prominent role in the Middle East (Iran and the Ottoman Empire). Timur Lenk’s attempt to re-establish the Mongol Empire, 1370-1405, became of brief importance, but his descendants founded the Great Mughal Empire in India in 1526.

At the same time, the caravan roads through Central Asia began to lose the importance they had for communication between the different world cultures. Only a few goods were so expensive that they could bear the cost of years of land transport, and silk had gradually become available from production areas other than China, which has the largest population according to Countryaah. 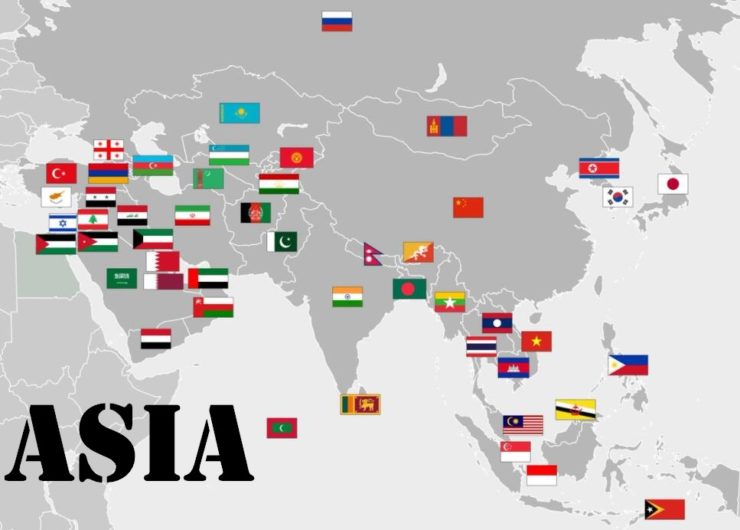 Relations over the sea had become increasingly important. Already in the centuries surrounding the birth of Christ, sailors had begun to cross the sea between Arabia and India and between India and Southeast Asia in the rhythm of the annual monsoons and in the direct line without clinging to the shores. With the Islamization of the Middle East from 600-t. this sailing seems to have picked up sharply due to the participation of Arab merchants. For some centuries, Arab merchants made regular sailings all the way to China, but from 900-t. this direct trade was replaced by smaller networks. Arab merchants continued sailing on India, though rarely longer than to the Malacca Strait. Chinese ships began most recently from 900-t. to sail to SE Asia and reached the Song Dynasty all the way to India’s southwest coast, the Malabar Coast.

Internal maritime trade in Asia, like the European, was of great importance in the last centuries of the Middle Ages, but unlike the situation in Europe, it rarely invoked the interest of the larger states. However, a single significant exception forms the Chinese naval expeditions during the Ming Dynasty, which from 1368 replaced the Mongolian Yuand dynasty. Under the leadership of the eunuch Zhenghe, in 1405-33, a series of naval expeditions were carried out, which brought the Chinese high seas ships to virtually all major ports in Asian waters. It was a far greater effort than the contemporary Portuguese voyages of discovery along the West African coast. Technically, there was nothing in the way for the Chinese ships to continue to Europe or America, but the nomads pushed against the borders of the kingdom, and China again turned its back to the sea.

Trade in the Asian waters was linked to emporia, ie. port cities which were favorably situated in relation to shipping’s dependence on the annual rhythm of the monsoon winds, and whose princes secured the merchants the necessary legal certainty. During the 1400-t. were the major empories of Aden at the entrance to the Red Sea, Hormuz at the entrance to the Persian Gulf, Cambay on the Indian west coast, Kozhikode (Calicut) further south and Malacca, which dominated the narrow waters between Sumatra and the Malacca Peninsula. Thus, after the discovery of the sea route to India in 1498, the Portuguese met a fully developed network that, to a certain extent, supplied exotic goods such as pepper and other spices to Europe, but primarily linked the Asian markets.

With the discovery of the sea route to India, the period leading up to European rule over much of Asia began in the 1700-1900-t. The Portuguese stayed in the 1500-t. owing to the strength of their ships and their superior ability to impose duties on parts of internal Asian shipping, however, primarily because none of the larger Asian states considered it essential. Political power rested in the Asian states on the mastery of agricultural land, and the transport of goods by rivers in India and China was far more important than trade by sea. The ancient empories received little support in their fight against the Portuguese – Hormuz and Malacca were conquered, Kozhikode was isolated and taken over by the Portuguese conquest of Goa. However, there was no talk of complete mastery of the Asian maritime trade.

From the early 1600s. Dutch and English trading companies also started trading in Asia. Initially, the companies had only political ambitions to the extent they considered necessary to protect their own trade. They failed to challenge the larger Asian states and were thus able to obtain fortified support points in India and SE Asia without much difficulty.